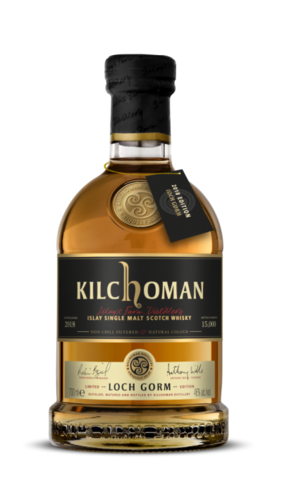 This is the seventh annual Loch Gorm Single Malt to be released by Kilchoman. Each release is differentiated by the distillation and bottling dates on the front of the bottle and gift carton.
Kilchoman’s Loch Gorm releases are traditionally matured in ex Oloroso sherry casks and this latest edition is no exception.

Loch Gorm, exclusively sherry matured limited edition has been a feature of the Kilchoman range since 2012. The 2018 release of 15,000 bottles is made up of nineteen oloroso sherry butts filled in 2007, 2008 and 2011, containing some of the oldest sherry casks ever filled at Kilchoman. Loch Gorm is the only global release matured solely in sherry casks, with its combination of rich sherry notes, cooked fruits and subtle Islay peat.

This range is named after a famously peaty loch over looked by the distillery; Kilchoman draws water for the production of Loch Gorm and their other releases from the burn that runs into the loch.