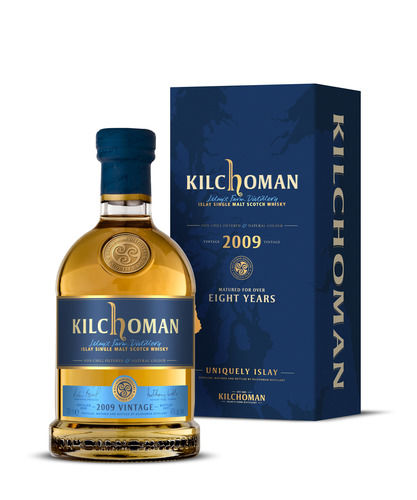 Kilchoman, Islay’s Farm Distillery, have released their first ever 8 year old single malt, the most mature expression to be released by the Islay distillery since its establishment in 2005.
The Limited Edition 2009 Vintage is a combination of fresh and refill bourbon barrels though Anthony also selected three 2008 Oloroso sherry butts to add additional layers of rich cooked fruits to balance with the lighter citrus and vanilla of the bourbon barrels. All previous Vintage expressions have been matured exclusively in bourbon barrels.

Anthony Wills, Kilchoman Founder and Managing Director; “The evolution of Kilchoman single malt is well represented through our Vintage range. Now at eight years of maturation, the balance and depth of character coming through on both the nose and the palate is incredible. The oloroso sherry influence in the 2009 Vintage compared to the previous releases has given this whisky a different dimension with layered fruit and added sweet notes."