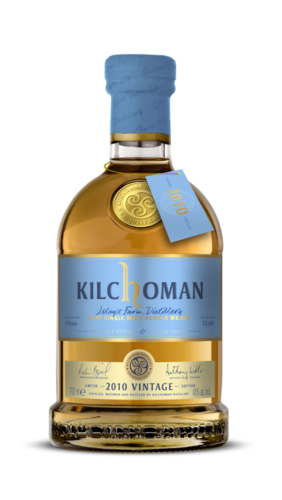 Kilchoman, Islay’s Farm Distillery, have released their new single vintage 9 year old single malt, the most mature expression to be released by the Islay distillery since its establishment in 2005.
The Limited Edition 2010 Vintage is a vatting of 45 casks, all filled in 2010. It consists of 42 fresh bourbon barrels and 3 oloroso sherry butts.

Until the previous vintage release, 2009 Vintage, the range had been matured exclusively in bourbon barrels however this year’s edition, as with the 2009 Vintage, is a vatting of both bourbon and sherry casks, this time roughly 85/15 bourbon/sherry casks. The balance of bourbon and sherry maturation is a tried and tested combination, it allows for both the vanilla and citrus flavours from the bourbon barrels and the rich, spicy influence of the oloroso sherry casks to balance and complement one another.