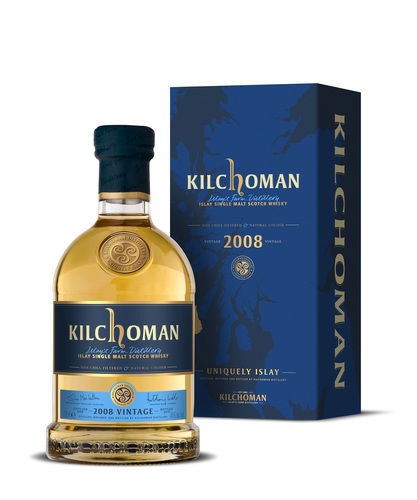 The Limited Edition 2008 Vintage is a vatting of fresh ex American bourbon barrels filled in July 2008 and bottled in August 2015. This latest release is a continuation of Kilchoman’s by-annually released Vintage range, the distillery having previously bottled 2006 and 2007 Vintages.

Anthony Wills, Kilchoman Founder and Managing Director; ‘The 2008 Vintage is a classic bourbon barrel aged Kilchoman however the additional maturation has added layers of soft fruit and sweetness not seen in previous releases. This latest vintage release makes me very excited about the future development of Kilchoman single malt.’

Founded in 2005, Kilchoman is one of the smallest distilleries in Scotland and was the first distillery to be built on Islay for 125 years. Kilchoman, the only independently owned Islay distillery is most famous as the only distillery to produce a portion of it’s whisky from barley grown onsite, completing all stages of the whisky-making process themselves using traditional farm distillery methods.

Nose: Lemon, citrus and butterscotch notes are prominent with soft peaty aromas in the background.

Finish: Long, clean and sweet with peat smoke and soft fruits at the end.