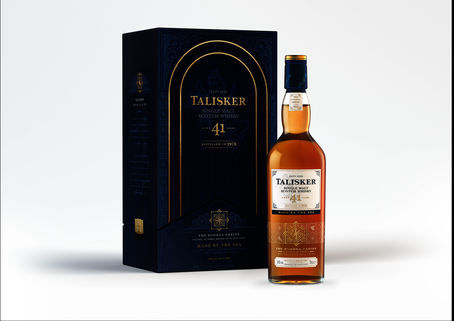 Talisker Bodega Series: Where the wild of Skye meets the warmth of Spain.

The Talisker Bodega Series is an exploration of Talisker’s more than century-old relationship with the Spanish Sherry region and the prestigious Sherry producer Delgado Zuleta. The Series uses only the oldest and most precious liquids from the depths of Talisker’s stocks and the most special Sherry casks from Delgado Zuleta to produce unique and powerful cask strength Talisker single malts.

Nose: A mild nose-feel, dry and maritime overall, with light prickle from the sheer character of the spirit. The aroma presents salty-spicy top-notes and a sweet, mellow fruity middle with hints of slightly caramelised apple crumble. The base is lightly maritime, with faded boat varnish, dried fish, and just a suggestion of smoke. A drop of water alters this very little, but brings up more smoky notes.

Palate: Great to drink at natural strength, when the taste seamlessly moves from sweetness through saltiness to pepper, smoke, fire and brimstone and is delicious to drink straight. The mouth-filling texture is rich and smooth. The taste starts with the sweetness of soft fudge, then a balancing saltiness gradually yields to a peppery heat that lasts and lasts. The expected chili-pepper kick at the back is gloriously unmuted. Sweeter, more savoury and smoky when reduced, it’s still delicious, while the pepper still finds a way through.

Finish: Long, hot, smoky and delicious, with mouth-cooling Sichuan pepper in the aftertaste amid lingering threads of peat smoke. Adding water reduces the heat while lengthening the finish.