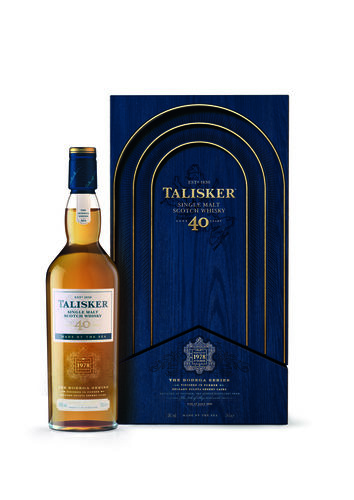 Talisker Bodega is one of the oldest Single Malts from Skye’s oldest distillery: a forty year old 1978 Vintage.
The Talisker Bodega Series is an exploration of Sherry Cask finishes, that illustrates the rarity and preciousness of the liquid and the true story only Talisker can tell. Talisker's Master of Malts pays tribute to the close relationship Talisker has had with Sherry and has created an exceptional Talisker 40-year-old whisky finished in casks from the famed Sherry triangle.
For the first launch of the Talisker Bodega Series, the 1978 vintage has been matured in casks specifically sourced from Delgado Zuleta, the oldest winery in the Marco de Jerez region, with whom Talisker once traded in the 1900s.
With only 2,000 bottles produced, this exquisite golden spirit lies in a beautiful screen-printed bottle, and is housed in an hand-carved sherry-oak casing to evoke the many stages of this whisky’s unique history and journey.

Talisker Bodega Series: Where the wild of Skye meets the warmth of Spain.

Founded in 1830 and distilled on the wild, western edge of the Isle of Skye, is one of the world’s great Single Malt Scotch Whiskies: Talisker. Within sixty years, Talisker was widely celebrated and elevated to iconic status by Robert Louis Stevenson in his phrase “ ‘The King O’ Drinks’ as I conceive it…” in 1887.
In these early years, Talisker was almost always matured in ex-sherry casks, which had travelled by sea from Spanish Bodegas, and imparted a rich, rounded and intense flavour. By unearthing material from deep within the Talisker archives, Master of Malt Dr Craig Wilson set out to recreate the flavour profile of old and pay homage to these long-gone casks.
Talisker Bodega Series is where the wild of Skye meets the warmth of Spain. This is a journey across the sea from Skye to Spain and around the historic coastal wineries of the Sherry Triangle, where Talisker once sourced its casks generations before.
The first in the series is an exploration of an age-old relationship rooted in craft and excellence, selecting casks from Delgado Zuleta by the coastal town Sanlucar de Barrameda. Talisker cask ledgers in 1900 recorded a strong trading relationship with this Bodega, the oldest winery in the Marco de Jerez region and supplier of wine to the King of Spain.
To craft this homage, Malt Master Dr Craig Wilson combined traditional craft skills with modern maturation techniques. First,he selected the most mature and highly prized 1978 Vintage 40 year old Talisker, aged in refill casks. Then, the Sherry Masters of Bodega Zuletahand picked five casks that had held the Bodega’s finest award-winning 40-year-old Amontillado sherry -the pinnacle of their sherry production.
These casks that once began the journey of a remarkable 40-year-old sherry, would now travel across the sea to finish the journey of a remarkable 40-year-old Talisker.
The result is a sensational echo of the old Talisker, enhanced by the gentle accent of the sherry casks, with rich raisin, peaty aromas and a rare, sweet opulence and fruity smokiness. Its unique intensity builds a Talisker trademark peppery kick, to introduce a soothing long finish.
Presented in a striking case, the opulent design was inspired by the distinguished arches of the sherry Bodegas and architecture of the sundial of Sanlucar de Barrameda.
The most precious Talisker expression to date, with just 2,000 bottles available, this is not just one of the oldest, but the rarest and most luxurious of finishes. There will be further releases of The Bodega Series, each finished in different casks to complete a journey around the Sherry Triangle.

Nose : Mild and rich, with light nose prickle. The sweet fruitiness of sultanas and pears in syrup, then orange peel, framed in oiled sandalwood, with a salty suggestion of seaweed or sea air in the middle, on a base of faintly smoky raw sugar. Water brings up a buttery note of short crust pastry and a waxy hint.

Palate : Most appealing. At natural strength, the texture is very fine; oil-smooth and lightly coating. The taste starts sweetly fruity-white grapes, more sultanas-then becomes sea-salty and savoury, before finishing hot and peppery. As the sweet waves of flavour roll out across the palate, they break over a hint of that Talisker trademark, hot chilli spice, and some scented smoke. There's great balance and vigour throughout. Adding water may tame the fire a little, but the lion remains wild at heart.

Finish : Long and warming, with a late, great tongue-tingling nuttiness in the embers as the fire slips down, and a last smoky trace of snuffed candle.