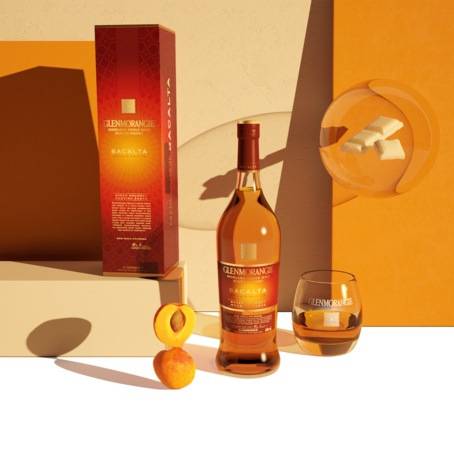 This is the eighth release from the Glenmorangie Private Edition Range.

In 1995, Glenmorangie released the world’s first single malt whisky extra-matured in Madeira casks. It was much-loved then and is much sought-after still. Dr Bill Lumsden, Diirector of Whisky Creation and Distilling, has long held an ambition to revisit this extra-maturation and to bring to it the expertise gained through the years of pioneering work in cask management. But only the very best casks would do –and such things are rarely available.

A new approach was taken and bespoke casks were created to exacting specifications. These were long-seasoned with Malmsey, the sweetest, loveliest and most prized of all Madeira wines. They were then baked in the sun while the intriguing wine they contained slowly sweetened within.
Years later, now shipped to Scotland, they were set to work extra-maturing the whisky, delivering enticing layers of complexity to this expression which is entirely delicious. The influence of the baked Malmsey Madeira casks is felt in the radiating and tempting flavours which characterise this whisky.

On the nose the overall sensation is sweet: there are inviting aromas
of ripe apricots, then mineral notes followed by white chocolate. A
little water brings out an aged-Balsamic tone, malty biscuits even. Its
taste initially suggests mint toffee, then come baked fruits,
honeycomb, almonds and dates. There is marzipan, white pepper and
juicy honeydew melon. The finish is of rich syrup, caramelised citrus
and pear, creamy fudge too, with a subtly appealing menthol
sensation in the background. Glenmorangie Bacalta is a whisky of
almost endless complexity.

Glenmorangie Bacalta (Scots Gaelic for baked) is the eighth release from the Private Edition collection. It has been created from Glenmorangie matured in former bourbon casks and then extramatured in casks baked under the sun that were once filled with Malmsey Madeira wine. Through Glenmorangie Bacalta, an uncommon wood finish reaches new heights of complexity.

Nose: Fragrant, honeyed and sweet. Some ripe apricots, mead-like, and a curious minerally/flinty note, followed by some sweet white chocolate.

Taste: An initial burst of mint toffee, with baked fruits such as caramelised oranges and apricots, lots of honeycomb, almonds and dates.

Finish: A rich, syrupy aftertaste, with more caramelised citrus and pears, some creamy fudge, but always an intriguing mentholic/eucalyptus sensation in the background.