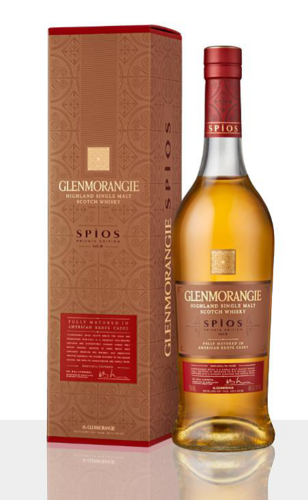 This is the ninth release from the Glenmorangie Private Edition Range.

Glenmorangie’s first single malt whisky fully matured in American ex-rye whiskey casks is the ninth release in the Highland Distillery’s acclaimed Private Edition series.
With its uniquely savoury and full-bodied character, Glenmorangie Spìos (Scots Gaelic for ‘spice’ and pronounced ‘spee-oss’) perfectly recalls the glittering heyday of American rye whiskey. In the early 20th century, rye was feted at the country’s most prestigious saloons, where its distinctive, spicy style inspired classic cocktails such as the Old Fashioned and the Manhattan. But, over time, the spirit fell from favour and slipped into obscurity, where it would remain for years to come.
In the late 1990s, as Dr Bill Lumsden, Glenmorangie’s Director of Distilling, Whisky Creation & Whisky Stocks, travelled to the U.S., the rare cinnamon and clove notes of this scarce whiskey caught his imagination. Aware that a spirit of Glenmorangie’s renowned smoothness could invite rye’s subtleties to shine through in a way that many others would not, he determined to one day bring a hint of American rye whiskey’s bygone elegance to the Distillery’s renowned Private Edition.

Nose: Glenmorangie Spìos first entices with its fresh and herbal nose, hinting at cherry, clove and mint toffee, followed by scents of green grass. A splash of water releases more perfumed notes, both crisp and clean – and an inviting complexity of herbal tones.

Taste: Then, rye’s characteristic spice bursts forth, as tastes of toffee, clove and cinnamon mingle with nutmeg and sweet, buttery vanilla.

Finish: The finish is rich, sweet and lingering, with toffee and Brazil nut emerging alongside a citrus tang.