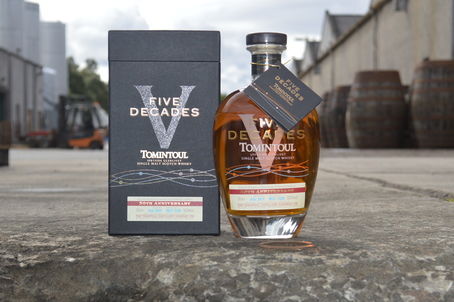 Tomintoul Distillery have released a very special and unique product, The Five Decades, to commemorate the 50th anniversary of Tomintoul Distillery, which started distilling in 1965. Individual casks have been chosen to represent the flavours from 50 years of craftsmanship at the distillery. Master Distiller, Robert Fleming, has personally selected casks from 1965, 1975, 1985, 1995 and 2005 and has overseen the marrying of these superb malt whiskies.

1965 – Rare and special whisky from the very first year of distillation has been included in the Five Decades edition. This whisky was notable for its soft and sweet nose with hints of orange peel, fruit cake, glacé cherries and a suggestion of spice caressed with a pot pourri of rose petals and Turkish delight.
1975 – An exceptional summer also produced exceptional whisky at Tomintoul Distillery. The hand-picked casks from this notable year exuded great maturity with generous amounts of spice and vanilla on the nose and with discernible floral characteristics on the palate, most strikingly, those of summer fruits and pear drops.
1985 – This year faithfully represented the 1980’s decade. Cold winters and temperate summers were ideal for maturing casks of malt whisky. The selected casks were very typical of the Tomintoul style, light but with plenty of sweetness – truly living up to the “gentle dram” description.
1995 – To mark this decade and add rich and interesting flavours, first-rate Sherry butts were painstakingly chosen. The whisky which had enjoyed twenty years of maturation in butts previously used to mature Sherry in Southern Spain contributed raisin, plum, prune, orange zest and fig aromas on the nose with hazelnut, walnut, herbal and soft sherried notes on the palate.
2005 – In this year, newly distilled Tomintoul was filled into the very finest virgin American white-oak barrels to mature unhurriedly for the next ten years. This whisky imparted wonderful vanilla, honey-sweetness and coconut flavours backed by an oaky-spice finish.
Only 5230 individually numbered Five Decades bottles have been released to commemorate the 50th anniversary of Tomintoul Distillery.

Finish: Enduring with sweetness followed by a nutmeg finale